The April version of NaNoWriMo struck a few days ago. I admit that I didn’t get anything done on the first of the month. However, over the past few days I finally put the finishing touches on Unlucky Chapter 13  and have since broken into a streak. I’ve completed a major chunk of Chapter 14, called Fork in the Road. 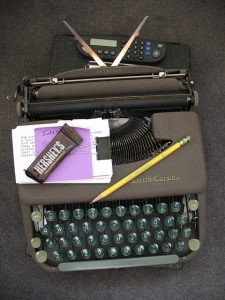 Within this chapter, I’ve created (what my editor and I believe to be) some of the best comic relief in The First Light. Yes, there are reasons to giggle and snort in previous chapters, but this scene is much more extended than the other punch lines dabbled here and there.

Some say that author-gods shouldn’t be too cruel to their creations. Yet in chapter 14, my main character is having one of those days, from stinging embarrassment to comical frustration. Anyway, if it wasn’t for NaNoWriMo, and having to Tweet #amwriting, I probably wouldn’t have gotten this done during the week.

You see, I’m moving soon and this week was filled with emptying closets and creating garage sale, eBay, and keeper piles of stuff. And let’s not forget the roofers that came by to patch some shingles. A busy week did unfold, but thanks to NaNoWriMo, I managed to squeeze in precious writing time and get something done.

What are you working on this April? Has NaNoWriMo helped to motivate you too?

5 thoughts on “Thank You NaNoWriMo for Chapter 14”