Recently, a historical mystery has sparked a debate on Facebook between Kristen Lamb (Indie Author guru and Viking Goddess) and me. Namely, who weaponized the wooden spoon? Was it the Vikings or the Italian grandmother? Both parties are famed in both song and story for their ability to transform any benign object within arm’s reach into a deadly weapon. I began a quest to find the answer.

First, I turned to several noteworthy historians who have presented us with Viking lore. Famed British chroniclers who write under the collective pen name Monty Python have expounded on a wide swath of human history in a series of films, from the Biblical Life of Brian, to the medieval quest for the Holy Grail, and even the rather post-modern philosophical epic The Meaning of Life.

Within the scope of their work, Monty Python has delved into the world of Nordic civilization, as evidenced by their presentation of Njorl’s Saga. Within this Icelandic Saga, there is no mention, either visual or vocal, of a wooden spoon. However, it does confirm the ability of Vikings to turn any benign object into a weapon. In part III of Njorl’s Saga , Eric Njorl, the son of Frothgar… is charged with using “the big brown table down at the police station,” in a deadly manner. While “the big brown table” may be wooden, it is certainly not a spoon.

There can be no doubt as to the historic veracity of this most scholarly endeavor.

Then I searched through the archives of Monty Python’s American counterparts – the Looney Toons. Elmer Fudd and Bugs Bunny have delved into prehistoric times through the medieval and modern eras as well. In one particular grand opus, “What’s Opera, Doc?” the duo performs Wagner’s four cycle opera Der Ring; there is no mention of a wooden spoon. Elmer’s aria concerning his spear and magic helmet – not spoons – should lay all notions of wooden spoons within a Viking context to rest.

Finally, I turned to the Beatles, who referenced the Nordic part of Europe with the song “Norwegian Wood.” Despite the fact that Viking influence is vast in the British Isles, the wood described in the song was thrown on the fire, and never fashioned into a spoon. In the end, in all of literature and film, I could not find a single reference to Vikings using wooden spoons as weapons.

What About Italian Grandmothers?

At a dead end with the Vikings, I turned to the other side of the question. 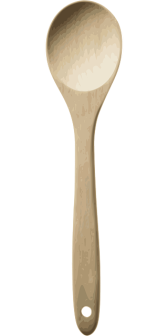 I only found modern references to Italian grandmothers and wooden spoons (and shoes, and rolling pins). But I believe there is an indisputable case of cultural appropriation stemming from Italy. Fuhgeddabowt the Men in Black, for Italians there are the Women in Black. This may be the root of the old joke: What’s the difference between an Italian grandmother and an elephant? About 25 pounds and a black dress. 🙂

Let me explain. In the old days, Italian women who did not wed most likely became nuns – women in black. From their roots in Italy, nuns and the convent culture have since spread throughout the world. Whether a nun is in France, Germany, Britain, the U.S., or South America, their prowess with using rulers as weapons is legendary. Survivors of Catholic education readily show their scars and even compete with each other concerning their number and intensity.

I find it highly probable that Italian grandmothers found the ruler to be so effective that they instituted similar punishment in their homes, using the closest thing they had on hand – the wooden spoon.

A Spoonful of Vanilla