When it comes to world building for a fantasy novel, an important step would be the creation of another language. There’s an entire world being presented in a fantasy novel, which means different, races, cultures, climates and geography.

Elves can be an important part of any fantasy world. I love them, and refuse to create a world without them. However, I am not going to simple take Tolkien Elves and drop them into my world. Sure, they may look the same, but they will not act the same or have a similar history. Therefore they shouldn’t have a similar language either. 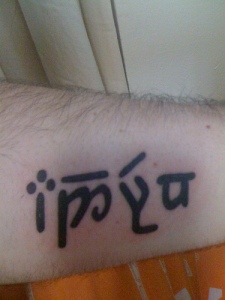 I’m a linguistic dilettante, so I can’t resist. I’ve decided that Elvish (Varnya) on my world will be based on a three letter root system, which is of course the basis for the Semitic languages. The language will also be conceptual, and will use prefixes, suffixes, and infixes to create different words while maintaining the conceptual three letter root.

I took the Russian word for “word” – Slovo and created my three letter root SLF (“V” and “F” are very similar). Next, I thought about all of the words that could be associated conceptually.

Next it’s just a matter of vowels, prefixes, suffixes, and infixes to create all of the necessary words. I’ve also decided that the infixes “la” and “lu” are only for verbs and “doers” of the concept.  Therefore, the word for “letter” in Varnya would be Salaf, and “author” would be Salulif.