A dictionary definition of “Anaphora” would state, the repetition of a word or phrase at the beginning of successive verses, clauses, or paragraphs.

“This blessed plot, this Earth, this realm, this England.” – William Shakespeare

From the above examples, you can see how this technique is used for a heightened dramatic effect.

Try to refrain from over using anaphora as well. In “Storm of Divine Light,” I properly used the technique twice in 376 pages.

Excerpt: Patrons never suspected the humble servant Dagorat once had another name. A name he had tried to bury; an infamous name which struck terror into the hearts of travelers and merchants alike. Blackmond Moonshadow, the most notorious rogue who ever wreaked havoc upon the distant Kingdom of Easterly. 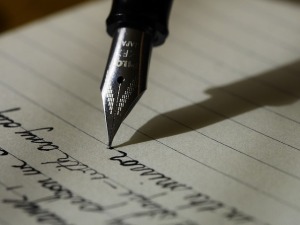 The word “paragraph” in the definition poses a bit of a problem. Other language / writing guru’s like Hofmann referred to the paragraph as a natural barrier to anaphora. Creativity Hacker refers to starting paragraphs with the same word whether consecutively or just too often as “Echoing Headwords.” This concept seems to apply to both paragraphs and consecutive sentences.

Let’s say that your MC is named Lisa. Imagine the paragraphs on one page starting as follows.

*Psst…I know that most of the sentence starters above seem like an assault of declarative sentences, but that is the subject for another blog post.

As you can see, beginning paragraphs with repeated words just doesn’t work very well. Unlike adverbs, where the usage rate is one for every five to seven pages, I couldn’t find the acceptable rate of repetition concerning echoing headwords.

It would be quite a daunting task to complete a novel with every paragraph starting with a different word. I went back into some drafts to find a rate of repetition in my own #writing. I found that you can repeat the start of a paragraph every other page, or at least eight to ten paragraphs apart, as long as they are not on the same page.

As for sentences, try not to use the same “headword” consecutively or bunched too close together.

Have you found evidence of this faux pas in some of your drafts?

Now that #NaNoWriMo 2014 is over, many authors, including myself will be scratching our collective heads in the #editing phase of bringing our works to market.

If I were to go into every rule for those three concerns, then this would be a book rather than a blog post. Try to obtain a copy of the Harbrace College Handbook, or if you’re in a pinch check out the Ask a Grammar Guru page on Facebook.

In the end, paragraphing seems to perplex quite a few #authors out there. After all, your paragraph can be spelled and punctuated properly and yet be considered wrong.

As far as the mechanics go, the general consensus out there for proper paragraphing is as follows…

When the speaker-tag changes, then a new paragraph is needed. If done right, then you can actually avoid the over-use of tags.

The action of one character causes a reaction from another character. The action-reaction dynamic needs to have its own separate paragraphs.

A Crumpled Paper Ball by Turinboy used under CC License

A character can only think, say, or do something. Therefore, keep it all in the family in the same paragraph. However, this can lead to paragraphs that are just too long.

Keep the length of a paragraph to five or six lines. If your character says and does a lot, then keep any internal dialog separate in order to avoid a lengthy paragraph.

You can go as far as half a page in one paragraph, if your intention is to slow down the pace.

Did you find this helpful? Did I forget to address something?